So the film begins, and you sit through what feels like 30 minutes of footage of bouncing boobs, jiggling butts, and all other kinds of awkward-to-describe movements of fleshy bits, and you feel thankful that a) you aren’t seeing this on a first date and b) that the cinema is half empty so that c) you don’t have to know whether the men in the cinema are all now sporting unexpected (but not totally unwanted, am I right lads?) boners.

“It’s Spring Break, bitches!” appears to be the vibe that director Harmony Korine wants you to feel from the get-go, what with all the dude-bros pouring beer over naked breasts and girls with their tongues out undulating their bodies to the sounds of Skrillex. Just when indeed will the beat drop?

And then we’ve got Vanessa Hudgens being all “I’m sexy now” and constantly putting her hand to her head in the shape of a gun and pulling the trigger (like, she’s just shot herself, that’s how batshit boring college can be) and we’ve got sexy Selena Gomez being all “I’m sexy now too! but also still demure, so the Disney Channel can still hire me” and two other girls, one of which is the most damn sexy out of all of them and the other who has sexy cool pink hair but is Korine’s wife so I don’t even want to think about the kinky shit she gets up to in her spare time.

So these four girls get up to crazy shit because “it’s Spring Break, bitches!” and also because at least two of them appear to be sociopaths, but they can’t escape the clutches of the po-po who kinda wreck their ~chill time~ until James Franco arrives as the bad-boy white gangbanger who maybe went a bit too method with his role this time because it seems quite likely that he went to bed each night stroking his cornrows and whispering “James freaking Franco playing a freaking rapper, how surprising! How novel!” 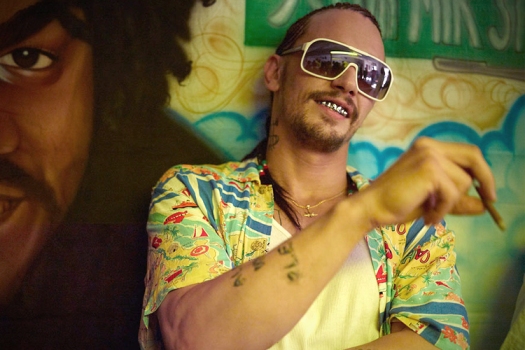 The rest of the film gets a little darker. No more Skrillex songs composed of happy blips and bleeps, now we’ve got compositions called “Scary Monsters on Strings” and lots of shots with a spinning camera meant to make you go “this is all getting out of hand!” But there’s still lots of partying and drinking and Vanessa Hudgens making gun shapes with her hands and James Franco saying “pussy” and at one point there’s a sex scene in the pool and I’m leaning over and whispering in my boyfriend’s ear “you better not get an erection, you dumb idiot, you better not!” to disguise the fact that I’m squirming in my own seat, and THEN IT GETS TO THE BRITNEY SPEARS MONTAGE AND I AM DONE, GAME OVER, THIS MOVIE HAS BROKEN ME, THERE IS NO TURNING BACK, SPRING BREAK FOREEEEEEVAAAA.